My lower back is giving me a lot of trouble at this moment and very much dislikes sitting down it seems. I haven’t had lower back aggravation  for quite a while. That’s something I could really do without. Apart from that its mostly business as usual in the music department and related endeavours at present. The weather has now moved over to an  Autumnal vibe too, so it is now quite a bit cooler. My bijou studio/music room is less chaotic than it was , ever so slightly. My brain not so much though. We have just had a totally surreal budget, which basically gives tax back to the richest one percent of the country and thats just for starters. Britannia, she’s always up for a bit of fiscal stimulation governor..

I found some unused song lyrics and put those to good use  on a recent track I recorded as unexpectedly they fitted well  and were better than what I was going to use for the song.

So this the aforementioned song:

OK  then on with business, except of course that I never am as I was never much good at it.

Nothing much else to report.

It’s I have been busy, with 2 rehearsals, sorting and tidying stuff up and so forth so it’s gone quite quickly. since QE2 set sale unexpectedly this week. It’s a very strange atmosphere though.  This hiatus and stilling of  the world. Shortly my car goes in for an MOT and service. Its old now at 16 years so it’s never a done done deal as to how things will work out or not.  Its done a lot of work for me over the years  so I have had my monies worth out of it for sure. So fingers, legs’ and toes crossed it is. If my car is not viable it will be a bit of a stretch to replace it.  I went to pick up some stuff at a store  which is at the interchange retail park. Weird, very aggressive driving in the car park as people were fighting over spaces. I never go to those places on a weekend normally, and now I remember why. I  have had one of those strange mental health days at the time of writing this. A bit of a wobble. I am not sure why, perhaps due to the very strange atmosphere at present but probably just because. This year has for me been for me personally a lot of false starts, plus a very unpleasant bout of Covid which hit just when I was finally getting back on form again. So today I am a bit fragile. Hopefully it will pass ere the dawn? Today I feel my age. It’s about 16C/60F so way cooler than this time last year.  Also I am no less arthritic either. That of course is no surprise 😲
The turn of the season also has an effect on the old bones too.

Thank You For Being

I have been churning out recordings (Mine, plus the Delta Ladies and Jon Bickleys and some others stuff) since I got here in 2018 without really trying to rationalise the Music Room/Studio. So for a week or so I am making the effort to try and improve the environment and working space. It’s got a tad chaotic. I have a lot of redundant kit too which I should really start reducing. I did find a couple of gems among unused bits and bobs though. An original Vox phase pedal which sounds ace being one unexpected find. My life is very different now though. I used to do up to 150 gigs a year, but that has long gone now sadly. If only I could still summon that level of energy though is unlikely I think. Fun whilst it lasted though.  But what next. Well a few things are simmering on the stove, but far from cooked yet. Or perhaps a more accurate metaphor would be that there are some promising shoots and budding, but some of the fruit undoubtedly will wither on the vine.

At the time of writing its QE2 state funeral tomorrow. Whatever one’s views on the British Monarchy it’s quite an event. The Queen is dead. Long live the KIng.

September and its cooler finally.  Here it’s mostly business as usual. Music and more music in various forms. Trying to sort out a few financial concerns and stuff.
Also though I am beginning to wonder about my health and if there is something brewing up that I have not been aware of. So I am thinking maybe I should tie up a few loose ends just in case?  Well you never know what fate might have in store one way or the other.  Luck does not last forever.

So hey, remember me this way. And don’t take it all too seriously.

This is not a massive winge, it is rather more about curiosity.

From time to time I submit recordings of tracks for use as library music and radio play and so forth when there are opportunities’ to do so. I make sure I submit a track in the appropriate style/genres that are being requested.What puzzles me is having looked at what has been selected by a certain company after a recent submission to find that the artist they have selected barely even gets their material played? Upon listing to the track they selected its a very bland Craig David/Rap crossover that’s been knocked up with a couple of samples on a laptop, perhaps the criteria is that it should be as un-memorable as possible? For example on one music site where an artist has been selected their tracks have only been played 20 times? It seems odd that they ignore submissions from people with say 12000+ plays? or 88,000… You would expect that they would go first to stuff that’s actually being listened to or is just another music business con perchance where the outcome is already fixed? At my age I should not really be fannying about with stuff but hey… Is it just ageist thing perhaps? Or is it simply that anything which is not “Urban” music is simply ignored?Answers on a postcard please?

Madness In My Dreams

It’s been an interesting month so far.  With just a bit of chaos bleeding into it.  I am fed up with aching too. Its tiring.
Yes it is but keep smiling won’t you all.

Showbiz is all tarnished glitter though and bullshit.  People want me in bands because of my skill set (Bands of a certain age that is, of course). If I had to trade on my looks as well I would be fucked pretty much (I do seem to be the acceptable face of Trans to a degree though). I do have to make an effort though to the extent that I don’t frighten the horses and look OK on publicity stuff too. I think I often look a bit like a younger slimmer version of Myriam Margolyes in photo’s. That’s not the worst look and my slightly olive skin tone allied with a generous nose might make people think my ancestry is Mediterranean so that makes me look a bit less weird I think. 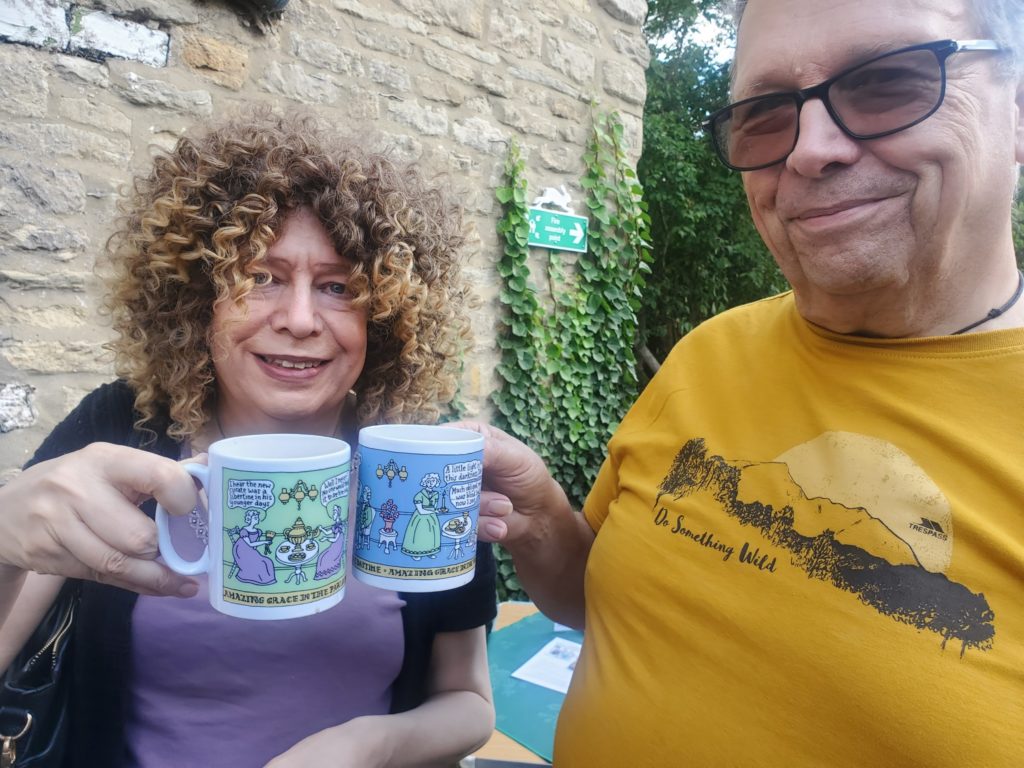 I am not really a youngster and even when I was in my 50’s I had days like this. Maybe I just expect too much at times. I am mostly more physically active than I have been for a couple of years and I simply forget it does catch up. The fact that I have a passion for music drives me one at times when the easy chair would perhaps have ensnared me permanently.

The Cowper and Newton Museum at Olney gig was very well attended, people really enjoyed it. Many compliments about my violin playing. One from a local classical player who was really knocked out by it. Slightly different to that which was planned as Jon was an hour and a half late, stuck in traffic. So Annette, Bob and I did a 35 minute set of our own to open. Jon then did his interview with the Historian chap, then we played the Olney hymns set afterwards. Jon sold a couple of Cd’s. We will do it again next summer if we are spared.

The Museum people were very helpful and nothing was too much trouble it seemed. If you are bored one day do check out the museum and garden as its well worth seeing.

Recent weird nightmares have  included being experimented on by some weird Victorian Dr mad scientist chased me with a big brass needle and injection things. I hid in a loo. Then I was hitting him with a chair and stuff over the head but he persisted….

A recent visit to the dentists, got myself a new electric toothbrush. Used one for years and a lot less bother than all that flossing business, but the old one died a few months back. My my teeth are OK so I l might as well try and keep them that way I suppose. My mouth’s a bit sore after the cleaning and polish. Still I suppose some people I know would pay good money to be tortured by a reasonably attractive women for 20 minutes…

The Covid thing has thrown me a bit. maybe in a month I will be more like my old self again? I am intend to start sorting stuff out a bit. I have a load of boxes using up space that I doubt I’ll ever need again. A mess makes me feel more confused than I actually am. I am still finding it hard to get on with stuff, its all a bit more uphill than usual. I could sit here staring in to space all day. Brain fog? I still seem to be on the one day OK next one knackered again cycle. I just need to take it easy.

Most of the time when my mental health issues present its is as anxiety and often irrational paranoia, but these two old friends don’t call as often as they used to.
The more company I get the better I am to an extent. It would be nice to have some purely social stuff occasionally but you can’t have everything

I have slightly overdosed on the nostalgia. I have been putting a lot of pictures on Instagram in the last couple of days, and suddenly felt a bit melancholic. Ho hum. The guitar part that I couldn’t get right went OK today which was pleasing so I finished that recording. I really should be sorting out my music room a bit, but there is not really enough time to do it or at least that’s my excuse anyway.Interestingly there is some research on cortisol and long Covid and/or slow recovery. Cortisol becomes depleted and below its normal level so whilst you don’t feel stressed, your adrenaline doesn’t kick in so you cannot rev up the engine at all.

I will take some vit D for a week or so which might help.

More rain though still not really enough, but it helps.  Meanwhile here is a something I am doing soon: 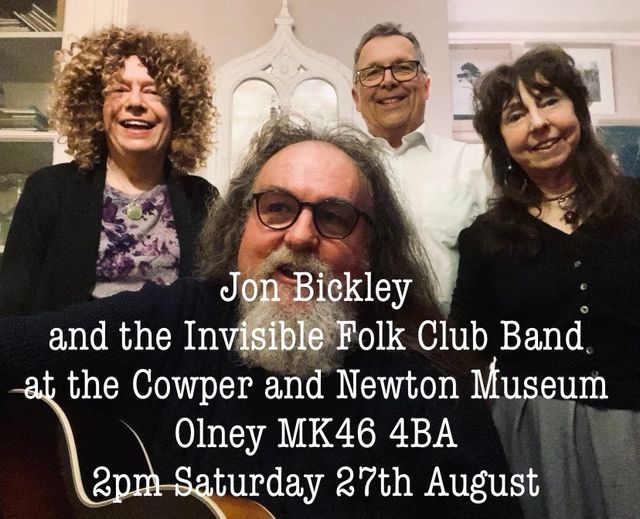 My Old Blog and other related stuff

glass-cage.com
My Blog till january 2015
250 Songs and music from me here on soundclick